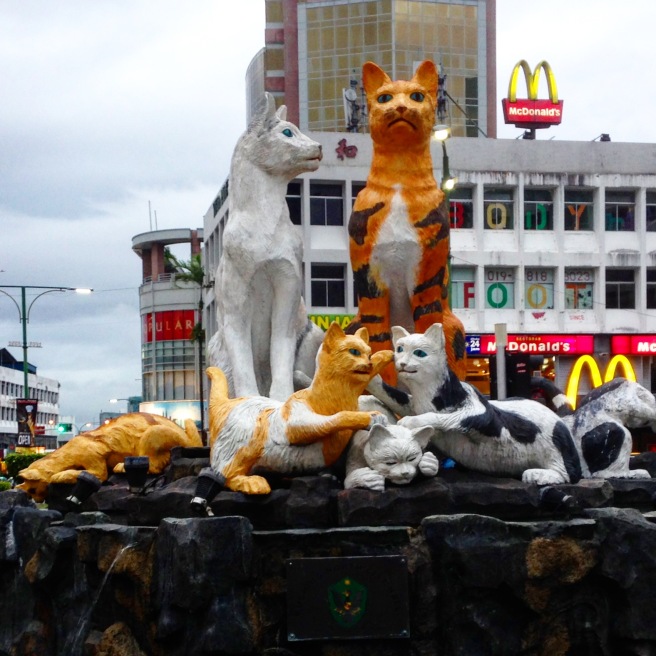 Good day fellow bloggers, readers, and friends! I have been away recently to my first personal retreat. I went to Kuching, Sarawak… Alone! I have been planning this retreat for a long time where initially I want to go to an island and I had Pulau Tioman in mind. However, it is kinda off-season going there in October, November, and December due to monsoon season.

After considering the risks, I decided on Kuching, Sarawak. It will be my first visit and my first flight after 21 years. The last time I went out from Malaysia was to Indonesia by ship. It was an unforgettable moment for me, especially when the plane lifted up. What makes it better, my sit was near to the window. I had the chance to watch the whole process and I was definitely excited like a little kid.

I was literally in tears because I feel that it was a touching moment and I can’t help to feel the sense of achievement. Less than two hours, I arrived at Kuching Airport and I took the taxi to the hotel. I stayed at Grand Supreme Hotel which I really like. The entrance to the hotel was kinda hidden by the surrounding shop lots but the hotel was a tall building and can be seen clearly from afar. I didn’t wait long to go out for a walk. It was cloudy but I came prepared.

I mostly spend my first day walking to the waterfront and it was around 15 minutes walk from my hotel. The sky was cloudy but there were a lot of people. There are stalls selling foods, drinks, clothes, nutritional foods, and beauty products. The walking path just beside the Sarawak River made me feels like I am at the beach with the air smells like sea accompanied with the blowing winds.

I also noticed that among the people walking were elder people together with their family. It may be something common here but I never really had the same feeling in KL or any other places I have visited. I even had this one guy asked me if I can help him to take his picture with his mother. The bond they within the family moves me. 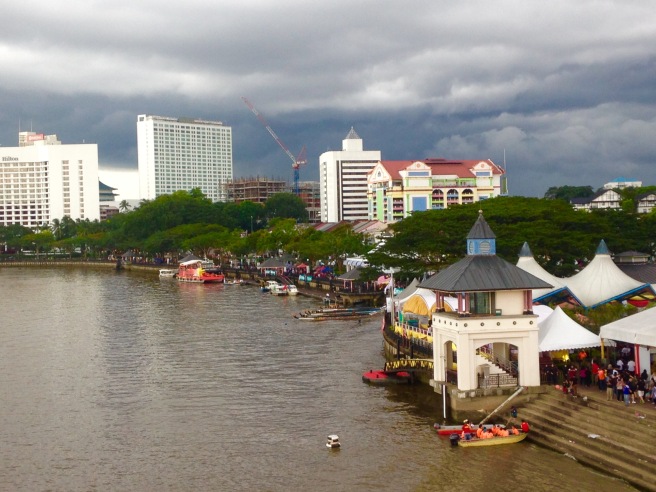 The waterfront was happening with crowds because the Sarawak Regatta 2017 was being held. Not only that, there were Craft Festival and Food Festival being held as well. I never knew about it until I visited the waterfront and I believe that I came at the right time.

You can read more about this annual event here: Sarawak Regatta Annual Event

As for the food, I was kinda lost where to eat at first. It was raining but I somehow stumbled on a good place. I had my first Kuching dinner at RJ Ayam Bakar Kopitiam and had their Nasi Ayam Bakar (Baked Chicken Rice). 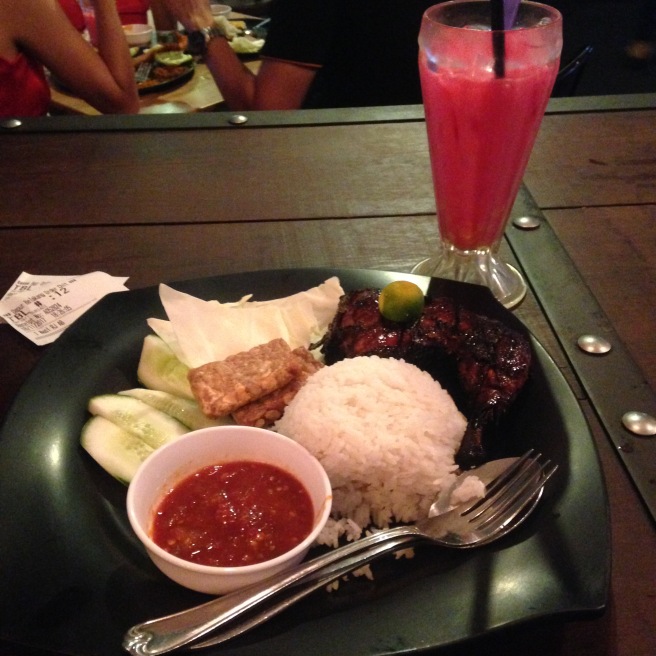 The rice and the vegetables are normal but the baked chicken and the sambal was great! The chicken was tender and marinated well. The burnt was just fine and I can clearly taste the sweetness in every bite. The sambal (condiment) was spicy enough and definitely enjoyable.

My friend did remind me that it gets dark early in Sarawak and by 6PM it was already dark! What an experience for me! I was pretty much tired from the flight and the walk, so I  went back to the hotel after I bought a wrap from KFC.

I started my second day with a heavy brunch. I walked to a restaurant recommended by my friends. It was Kopi O Corner located at Jalan Satok which takes me around 25 minutes walk from my hotel.

The Special Teh C Peng which I read the menu as O Peng because of the font. The waiter was so confused until he pointed out that it was a C. My bad! 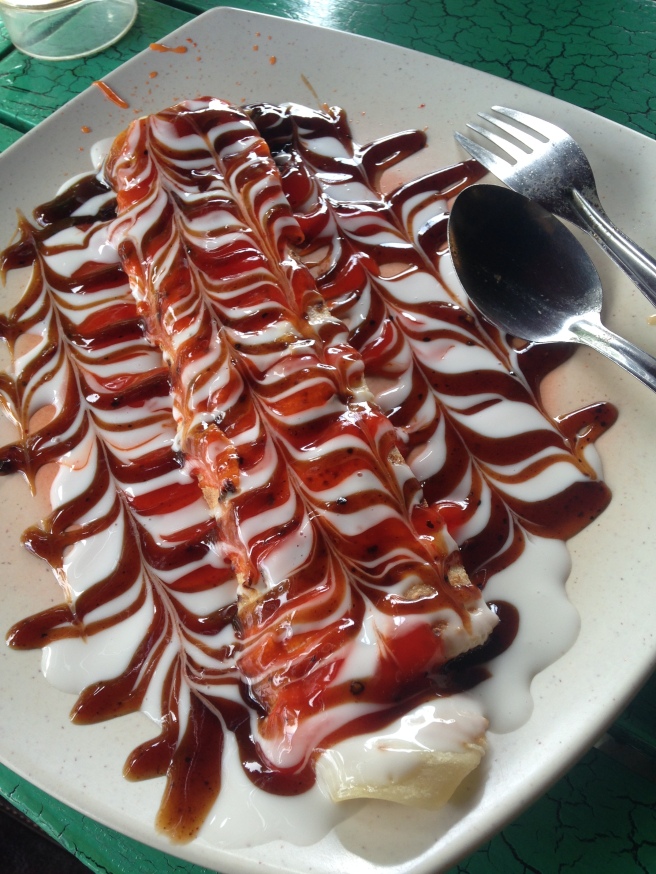 The Roti Canai Cheese which I can only taste the sauce, mayonnaise, and black pepper sauce. Do try for the sake of trying.

Laksa Sarawak. This is the first time in my life I had Laksa Sarawak even though there are many restaurants in Peninsular offered the Laksa Sarawak. I like the broth so much. The taste of seafood plus a little of coconut milk mixed very well with the Bee Hoon (Rice Vermicelli). It was a wonderful food experience. I like this one!

Mee Kolok Special. When it was delivered to my table, the first thought in my mind was ‘How should I eat this? Were there any special way to eat this?’. I was confused definitely. The restaurant was bustling with customers so I just took my own approach to eat it, using my instinct. The soup was light and good but that big chunk right there was hard and the meat was chewy. I prefer the dried meat on the noodles. The noodles was quite oily but this was my first time so I don’t really know if its supposed to be that way. Overall, I would try again!

After I ate all the dishes, I took a little break and walked to the waterfront again. It was a lot more packed but at least the weather was nice. I managed to go through each booths on the Craft Festival. The crafts are made by the locals from different places in Sarawak. I found this one traditional Iban dress and it was so lovely. I remembered that my friend was an Iban and she had to do this one photo shoot with Iban traditional dress. To wear it, it takes few hours and the cost was around RM10,000.00! It was finely made and beautiful.

At the waterfront, they were preparing for the VVIP to arrive and I was curious so I waited as well. To my surprised, the VVIP was the Sultan of Brunei! It was very hard to get close because of the crowds and the guards. Luckily for me, I has been standing in the designated media area for their photo shoot. So, I managed to sneak in and equipped with just my mobile phone. The history of Brunei and Sarawak goes a long way back and the crowds loves the Sultan too. They went on a cruise along the river while watching the final Regatta race.  As for me, I spent my time walking around and went back to the office and went to sleep before heading back out for dinner.

After I got a little sleep, I went out to Top Spot Food Court for my dinner. It took around 5 minutes walk from my hotel. It was a big food court with plenty of tables and  there were a lot of customers that day. Most of them came with families and sat at the big tables available. The funny thing was, I was eating alone in a table that can cater for 10 people.

I had this one small serving mixed seafood and vegetables. You can actually choose what you want to eat and they will cook it for you. The ingredients was looking fresh and good. I like mine a lot as the flavor was sweet and a little spicy. The fish slices was sweet and fresh! I hope that I can come here again and try other ingredients.

I didn’t really do much after my dinner, I headed to Hills Shopping Mall. My impression on the mall was, empty. The mall was kinda empty but luckily that time, there were a book sale on the ground level. I bought two books and I couldn’t find the book, Master of Murder by Christopher Pike though I found books way older than the one I’m searching for. My friend was looking for it, so I say to myself, why not I try too look for it here.

My plan to spend my last night at Kuching was to have a supper at Lepau because on my first night there, the restaurant was packed with many customers and it gave me the impression, it was a good place to eat. Plus, it was so near from the hotel I was staying. Unfortunately, it was closed that night! I was so disappointed. Luckily, there was another restaurant which was near to my hotel, Sharing Planet Persiaran Ban Hock. 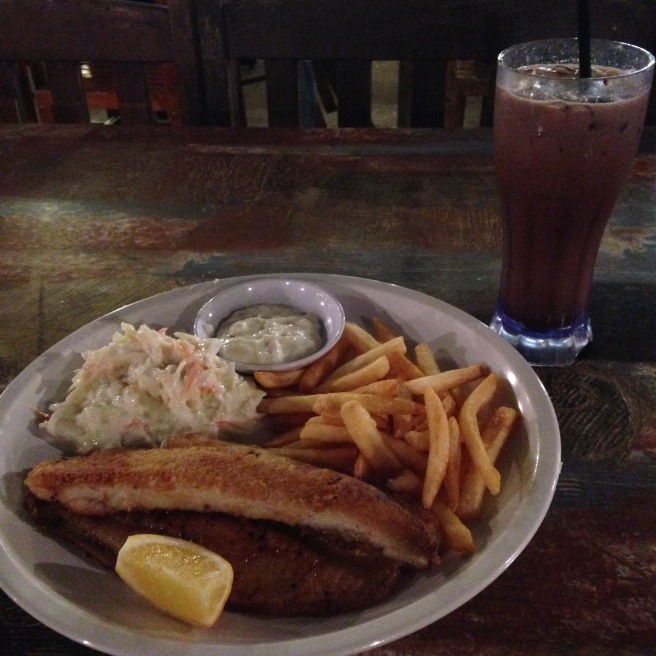 For my supper, I had grilled fish. The portion was generous and I really like the fries and coleslaw. As for the fish, I’m fairly disappointed because it doesn’t taste that fresh or it was squishy. I don’t enjoy it. Or perhaps, I was too full for the day. Who knows!

The not so early in the morning, I already felt low because it was my last day. I really enjoyed my trip and kinda sad to leave Sarawak. Before I left Sarawak, I have one more mission in mind. To get the famous Kek Lapis Sarawak (Sarawak layered cake).  After a little Google searched, there were two on the top of the list.

Kek Lapis Sarawak Dayang Salhah and Mira Cake House which both located across the Sarawak River. Interestingly, the Dayang Salhah was located at Kampung Gersik which is quite significant with Gersik in Indonesia. Any Baweanese will recognized the name. Sorry I don’t have any pictures on the cakes. 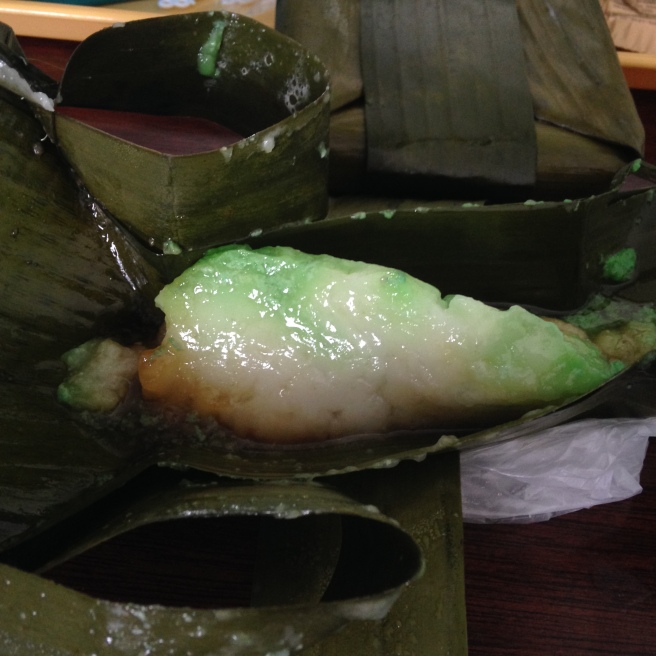 After I bought my cakes, I found this one stall selling a traditional ‘kuih’, Ratu Bongkol. The taste of sweet and saltiness with its soft textures just melted in my mouth. I love it a lot! My friend told me that, there are more foods available during Ramadhan. Perhaps, one day!

Overall, I love my trip! The experience and being free was amazing! I really would like to return to Sarawak for the cultural experience! If you are considering to come to Sarawak, do plan wisely and avoid coming during the Monsoon season. The rain can be heavy and unpredictable.

Thank you Sarawak for the experience and I will be back!

A writer, poet, content writer and a cloud filled with ideas! I am the writer for Write Ally Write! View all posts by Ally L. Mare